One thing I've noticed in my travels as an American is that people believe what they see on TV.  I've had countless conversations overseas with people who base their cultural understanding of my country on episodes of "Friends" or think of Megan Fox and Angelina Jolie as "typical" American girls!  Foreign television does offer an interesting window into ideas, standards, practices, and life in another country, but it is also a fictional world that you can't accept at face value.

When I started watching Korean dramas, I was intrigued by the information they contained, and wondered what was fact and what was fantasy. I was HOPING that real-life Korea was indeed filled with beautiful millionaire men who have a thing for very average-looking poor girls.... While I didn't manage to get involved in any love triangles involving the F4 or rock band mates who competed for my attention, (Could it be that these things aren't realistic???? oh noooooo....) I did find that some of the sweet things couples do in dramas actually occur in everyday life. 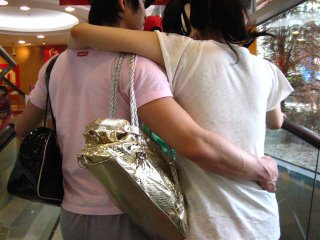 To the American eye, this is sweet and chivalrous.  Not to mention, we find it pretty funny to see a boy carrying a girl's handbag.  This is a really common sight in Korea, though.  I'm pretty attached to my purse, and my friends occasionally tease me for keeping it in my death grip at all times, even at house parties.  Maybe it's the Philly in me? My Korean boyfriend has definitely carried my bag, though, on more than one occasion. 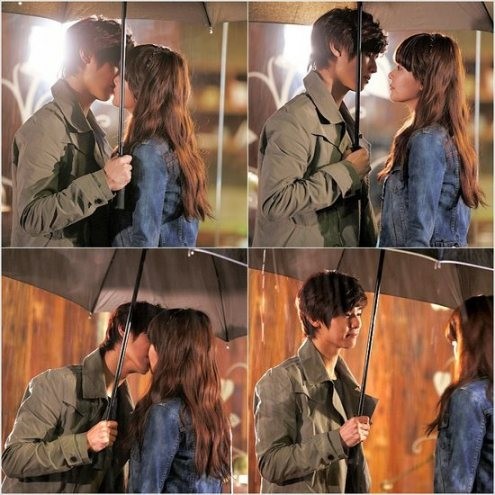 I have only ever been in Korea during the summer, which is when the rainy season occurs.   Two people under one umbrella is not something you see very often where I am from, unless someone got stuck in the rain and forgot theirs.  In Korea, however, it is perfectly normal to see couples sharing an umbrella. I spent many a rainy afternoon strolling the streets of Seoul under my boyfriend's umbrella.


Korean couples seem to love to wear matching outfits!  Any place you go in Korea you are sure to see a few couples in matching outfits, or "couple looks."  My boyfriend was born and raised in Korea, but his attitude and style is decidedly Western.  He is a little edgy, enjoys hard rock, and is not a big fan of Korean pop culture.  He's a lot more Japanese rocker than K-pop idol, that's why I was shocked (and delighted) when he expressed an interest in wearing a couple look.  I thought it was adorable when he planned it out with me, asking, "Should we wear black skinny jeans or jean shorts? Black shoes, sneakers, or maybe flip flops?" Maybe he IS Korean after all!  LOL. We shopped a bit for some matching shirts, but nothing wowed us, until we were buying some things in one of those discount malls in Dongdaemun and stumbled upon what is possibly the cheesiest couple look set of all time!  Here are the couple look tees we bought: 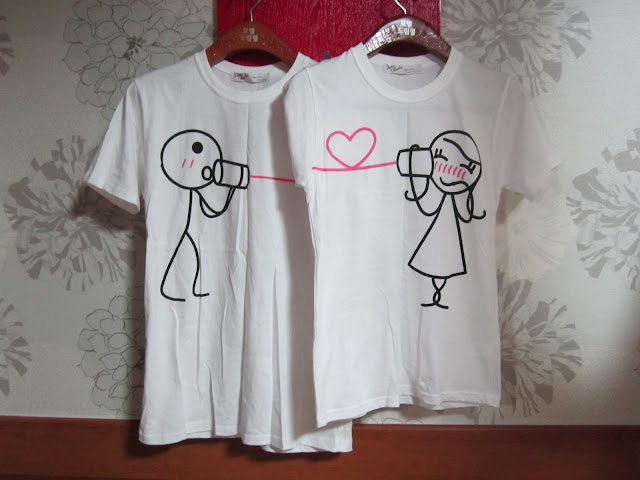 I have seen couple rings in few dramas.  Almost like wedding bands, the rings are meant to show your commitment, love, and unity.  Most couples wear the rings on their left ring fingers.  While my boyfriend was shopping in his neighborhood, he happened to see some stands that custom engrave stainless steel bands, so we had a set made.  As we pondered what vomit-inducing ultra sweet phrase we could get printed on them, it came to me...
사랑해 하늘만큼땅만큼... It means "I love you from the sky to the Earth" which is a sort of cutesy thing to say in Korean, similar to saying "I love you thiiiiiiiiiiiiiisssssssss much!!!" in English. Ever since my boyfriend taught me that phrase, if he ever asked how much I love him, my reply was always "from the earth to the sky" (I edited it a little because in English "from the sky to the earth" sounds backwards to me.) So, his ring is printed in English and says "my name..from the Earth to the sky" and mine is in Korean and says " his name...하늘만큼땅만큼" 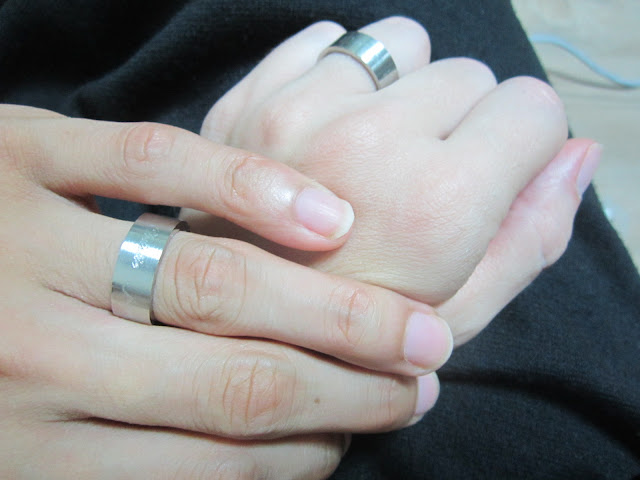 Posted by lifeasart at 4:12 PM